It’s a word I have found myself using a lot lately.  Although it does not sound that exciting or flashy, it is an important word to have in the back of your mind.  The Biggest Loser is just one of many different things that has had me thinking more about what things in my life are sustainable and what things are not.  For the contestants on the show, one of the biggest unknowns on the show is what will happen to them once they leave the ranch.   It is a whole different ballgame without the unique support and encouragement (or kick in the pants) from their trainers along with the camaraderie of their teammates.  (Read part one of Biggest Loser Theology here)

This is why having a plan that is sustainable is so important.  Having a compelling enough “why” behind it is also key (read part one of Biggest Loser Theology here).  If short term success can be grabbed, it is only valuable if it lasts.  Think about it.  If you went through a boot camp tailored to fix something in your life that you felt was lacking and experience quick results, that’s awesome!  However, fast forward months later.  In the event you are right back where you started, it would almost seem that you would be in a worse off position.  It would be defeating to know that you had everything to succeed, tasted it, but lost it.  Overall it is pretty easy to make a short term change, just go to a gym and see how packed they are in January.  A sustainable, lasting change, can be more difficult but much more rewarding.

Off the top of my head I’m thinking this could apply to time management, finances, and of course ministry (specifically discipleship).  What other things do you see thinking long term and being sustainable could apply to?

Pay attention, you can always learn something.

It is pretty obvious to that who you surround yourself with makes a big difference.  Not only that, but everything else that you expose yourself to can also have an impact whether it be music, TV, movies, or social media and blogs.  There are times when it can be a running joke about how ridiculous the latest reality show can be.  I get it.  If you would have told me 5 years ago that there would be enough interest to warrant a show about auctioning off storage containers I would have laughed..at the idea of course, not you.  Recently, however, I’m seeing that something can be learned from just about anyone.  Some times it can be from what a person is doing really well, or on the other hand a lesson can be learned by other’s mistakes.  I have heard it said that a wise man learns from his mistakes, but a wiser man learns from the mistakes of others.  One example of learning from an unlikely source for me has been the inspiring show, the Biggest Loser…

There is one big idea that I have already gained from watching just a couple episodes of this show:

Without a “why” there is no way

It can be said for many things, but as humans we are driven by and motivated by values and beliefs that are deeper than the rest.  Everyone on the Biggest Loser show did not casually show up because it might be something cool to do.  One man was in a car wreck and his kid was injured because his front seat failed and slammed into his son.  He felt that his son’s injuries could have been avoided if he did not weigh so much.  Others were confronted with the harsh reality that they will likely die soon, if they continue on their current path.  I do not know about you but those are pretty solid reasons and motivations to have a purpose behind taking action.  No wonder they are putting themselves through this brutal process of life change.

Everyone has a “why” behind their actions, they may not be the most logical or the best, but it is there nonetheless.  Are we happy with the “why” and the driving force behind the decisions that we make?  Are our lives driven by a purpose that honors God, or by other selfish motives?  Not an easy question, I invite you to wrestle with that question with me.

I’ll never forget reading Rick Warren’s book, “Purpose Driven Life” and having my eyes opened to a much wider definition of the word worship.  Too many times it is seen as simply a synonym for the music time at a worship service.  It is so much more than that.  Then we can get real crazy and start thinking about how families can worship together away from a local church building.  Interesting enough, a number of people are beginning to travel down that road and want to see what family worship might look like on a practical level in their home.  I’ve recently read through one of the latest books on this topic, below are my thoughts on it… 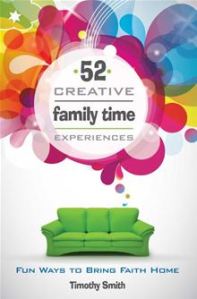 First of all I think it is pretty cool that there is enough interest for this book to even be published.  Plenty of people seem to be convinced of why faith building should take place at home, this work by Tim Smith starts digging into the potentially overwhelming how.  Smith opens up with some insight on some basic tips on interacting with kids, one for example is to not default into lecture mode when there are so many other possible ways to communicate.  This is a really good section to give attention to because jumping and doing some of the experiences that he lays without having a vision for them would not be the best use of this work.  The rest of the book lays out a very detailed strategy on how to create a family worship time, each of which are obviously adaptable so that they can be customized to your needs.

It is organized in a very user friendly way and Smith realizes that these things need to be simple, otherwise families could get easily discouraged if this is a completely new concept in the first place.  Some of the experiences are for any time and others are focused on specific occasions and holidays which is an important piece.  The best way to view this book is by seeing it simply as a tool to kick start future years of family worship experiences.  The author provides a solid number of different experiences which appears to be enough in theory to teach parents “how to fish” in this aspect of their faith and how that might express itself.

(Full disclosure: our friends a Randall House provided a free copy of this book in order to encourage authentic and honest feedback.  All of these thoughts are my honest opinion.)

My Facebook news feed has been blowing up with people giving a daily post of what they are thankful for.

It’s definitely a healthy thing to do.  Even when there are times if I get frustrated or irritated with a person, situation, or circumstance, if I pull back for more than five seconds and look at the big picture, one word comes to mind, blessed.

Here are some of the reasons for that:

My wife Katelyn, who I’m thankful to have by my side during this wild ride called life.  It really is amazing to have a spouse who shares core values with you and can buy into the idea that we are a team with a similar vision and mission.  We also just enjoyed a great Thanksgiving break with both our families.  I do not use this word often but that time was, well, precious.  I am also thankful for having a purpose in life, food, too many clothes, a place to call home (temporarily), scholarships, overall health, jobs, excitement of meeting new friends and reconnecting with previous ones, no pressure to be perfect, hope for eternity, and baseball.

On a random note, something else we are thankful for is that we have discovered jumbo marshmallows that make jumbo s’mores like the one below possible!

Who’s got your back?

This past week myself and some other area youth workers began the, “NKY Youth Ministry Network.”  There are many reasons why this is awesome.  The fact this group even exists makes a statement about the church as a whole as well as our ministries.  Instead of feeling like we are competing with one another, we all recognize that we are a part of THE church (body of believers) which has a shared mission.

Another important piece is that it is not just a business-like networking meeting where we are trying to exploit each other’s resources and connections, we are simply sharing life and encouraging each other.  That is the foundation of what we are about, we believe youth ministry happens best in shared-life community.  Joint events and other types of partnerships might flow from this identity but the foundation is rooted in believing that having a group of people that understand your particular position and role within a local church is valuable.

It is a round-table type of setup and is not a one-sided conversation, which seems to be the way everything is heading these days.  This circle is already made up of men and women from the Christian, Baptist, and Methodist denominations.  Unity is a beautiful and biblical concept.  The NKY Youth Ministry Network is a great thing to be a part of from the beginning and I cannot wait to see what the future holds!

I have to believe that this sort of network community is already happening for all sorts of other walks of life as well.  If not, it totally should!  Are you involved in any sort of group with a similar approach to the NKY Youth Ministry Network?  Have you heard of any other groups like this in other types of jobs/vocations?  We’d love to hear your thoughts below!